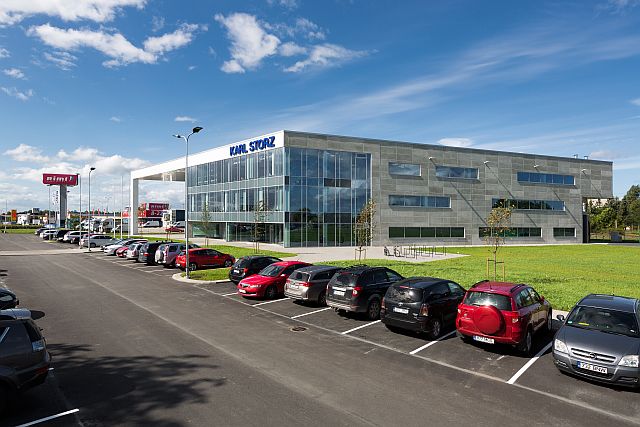 Estonian Concrete Society announced today the winners of the "Concrete Building of the Year 2016" competition at the Estonian National Museum in Tartu.

Comment by the jury: "The elemental building with a deliberate content, whose exterior is diversified, the outer panel of the building is divided horizontally into rectangles with false edges. The game's façade is guaranteed by the use of templates with two different patterns, plus smooth, untreated surfaces. "
The chairman of the jury, Aadu Kana: "The building used facade elements E-Betoonelement titanium dioxide. According to architects, the goal was to achieve a bright, natural-looking concrete surface. "

Commentary by the jury: "In addition to the concrete exterior, the surface of the prefabricated concrete elements is also widely visible in the interior. Attention has also been paid to details, which are, for example, concrete door openers. "
The brilliant performance of concrete elements that the jury liked was responsible Swetrak AS belonging to the Consolise group.

An original, modern architecture, a new building in its environment, which brings elegant concrete to the surface as the benefits of modern structural material.
Jury comment: "This house is ambitious with architecture, the whole concept of which is based on concrete. The concrete enters the magnificent dialogue with steel and glass in this house.
The chairman of the jury, Aadu Kana: "The quality of concrete works is also very good - and to what extent! With the most recent back rooms and "blind" storage. Until hand grinding of concrete stairs. All the parties involved in the construction of this house have done an excellent job - to praise the Estonian people! "

Special prize arhitektuuri eest – Narva coastal building.
Architectural bureau JVR OÜ - Kalle Vellevoog, Andrus Andrejev, Martin Prommik.
Comment by the jury: "Architects have taken into account that the concrete building would merge into the landscape and would not dominate excessively, but would be actively used on different levels. A concrete building with a complex configuration and pure casting. "
The chairman of the jury, Aadu Kana: "The views that open here are extraordinary. An interesting landscape and historical and political symbols - a contemporary, meaningful historical and natural environment. "

The Estonian Concrete Association is a company that promotes the use of concrete as a building material for domestic use, which includes 56 companies, organizations and private individuals.

The Association of Estonian Building Materials Manufacturers is an association of construction materials manufacturing and sales companies, which comprises 62 enterprises.

Additional information:
Aadu Kana, chairman of the jury of the contest "The Concrete Building of the Year 2016"
Honorary Member of the Estonian Concrete Association Phonel: 50 49 477