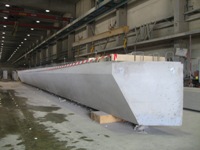 The first pre-tensioned box-beams with trapezoid cross section were cast on May 3 in Tamsalu factory of E-Betoonelement. The bridge beams will be used as edge beams in the deck construction of the overpass of Kroodi grade-separated interchange. The longest beam in the project has the length of 25,2 m. Manufacturing of beams in Tamsalu is successful due to good preparatory work and tight cooperation between the design and factory teams.

The principle of box-beam solution originates from Spanbeton, who is the leading Dutch manufacturer of pre-tensioned bridge beams and also a sister company of E-Betoonelement. The current length record of this type of beams is 61.75 metres. In the Netherlands box-beams are widely used, partially due to the speed of deck work – the load-bearing deck part of a bridge will be ready practically immediately after the assembly of beams and their mutual fastening with post-tensioning cables.