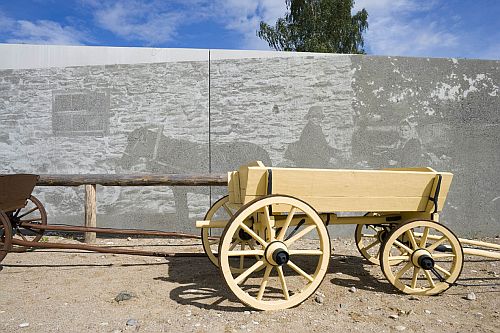 The outdoor area of the Estonian Road Museum – “Teeaeg”
Architects: Malle Jürgenson, Krista Lepland and Tea Tammelaan – Laika, Belka and Strelka OÜ
Maarja Kask, Ralf Lõoke, Karli Luik and Pelle-Sten Viiburg – Salto Arhitektuuribüroo OÜ
Location: Varbuse, Kanepi Rural Municipality, Põlvamaa
Proposal justification: This is the first project of the kind in the Baltic States where wall elements to be assembled of graphic concrete have been produced based on sample photographs.

Perpetuating photographs on facade surfaces in the graphic concrete technique is perhaps one of the most complicated methods of finishing in the industry of prefabricated concrete products. Good results require close co-operation between the architect and the manufacturer.

In order to achieve excellent results in producing graphic concrete, it is important to create a contrast between the cement stone of concrete and the hue of infillings. As graphic concrete is rather monochromatic and lacks of intermediate hues or the so-called “grey-hues”, this sets certain conditions for the choice of photographs. Often, suitable photographs also need pre-treatment before they can be used.

This, in turn, sets higher requirements for concrete technologists, who have to compose a suitable concrete recipe. The aim is to achieve as precise a realisation of the architect’s vision as possible.

The production of graphic concrete pictures also requires real mastery from plant workers. Panels, of which each is a small shred of a bigger picture, are like puzzle pieces forming a whole. The whole facade must be even and the continuation of the picture from one panel to another must be accurate and smooth. This sets higher requirements for production and construction tolerances. The work requires utmost precision and cognition of the whole.

In addition, the timely and masterly washing of the panels is very important. Washing off unhardened concrete particles from the panel surface is what generates the picture. Excessive or too little washing can significantly affect the quality of the picture. It is not possible to provide specific guidelines and the washers themselves have to perceive what is “correct”, thereby directly participating in the creation of the graphic concrete picture.

Achieving the best result requires full understanding between the architect, the customer and the producer, as well as time and the preparation of several model examples.