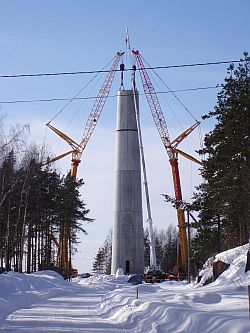 The ever-growing demand for wind energy has added wind turbine towers made of precast concrete elements into the product range of Consolis enterprises, incl. E-Betoonelement. As wind energy has become one of the most important sources of renewable energy in the world, Consolis offers its clients concrete towers that provide an alternative solution to steel. So far, wind turbine towers on mainland have been primarily built of steel, because the heights of towers have mostly remained below 100 metres and the capacities of turbines have been low, less than 2 MW.

More powerful turbines need to be installed on top of higher towers where the wind is stronger. It is financially practical to use concrete when building 100-150-metre high towers. Concrete towers can be built entirely of concrete or as a hybrid of concrete and steel, in the case of which the lower part of the tower is made of concrete and the upper part of steel. The sister company of E-Betoonelement, Parma Oy, has already entered into a contract for manufacturing the first four hybrid towers of concrete-steel. The windmills will be set up in Hamina, 100 km east of Helsinki. The agreement of Parma Oy includes the technical design of the concrete part, production, transportation and assembly. The height of the tower is approximately 100 m, of which half is formed of concrete and the other half of steel.