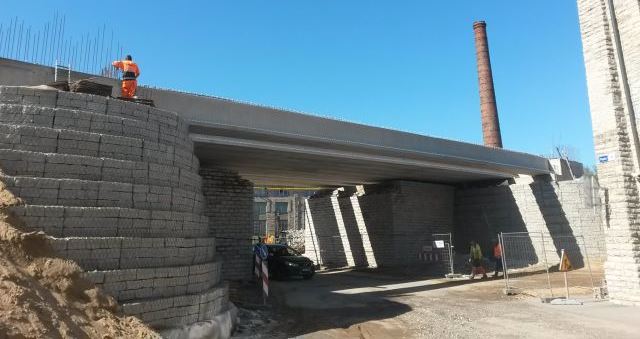 The representatives of concrete materials manufacturers say with one voice that so far the products related to road construction projects have made up an unreasonably small part of the total volume of production, although respective manufacturing capability is there.

The emphasis is on concrete elements of bridges and viaducts

The manager of infrastructure products of AS E-Betoonelement Kairet Luiga said that E-Betoonelement has been manufacturing prestressed concrete bridge beams in their plant already since 2000. Over the last fifteen years they have worked a lot on extending the selection of solutions offered. "Right now we are able to design and produce ZIP-beams, BOX-beams, T-beams, various board solutions: prestressed slab beams, 10 m wide deck-plate elements, etc. The largest openings that we have bridged with beams are 30 m and slightly above. The 186 m long Kroodi viaduct with precast deck structure, which was opened to traffic in September, has been so far our largest road construction work in terms of total length,“ says Luiga.

An extremely interesting project with a very short construction time was a cycle and pedestrian tunnel built under the railway in Lilleküla, for which we designed and manufactured tunnel segments,” said Luiga.

In addition, the company produces elements for crossings, cables with cover plates and various marking posts in a wide range of variables.

In many countries, such as Finland, Norway, France, etc., according to Luiga, prefabricated concrete solutions are commonly used as collision bumps.

As the E-Betoonelement belongs to the Consolis SAS group, according to Luiga, the company is not participating in external defects most directly, but cooperates with the group's sister companies.

Luiga mentioned that precast solutions are normally preferred in case of difficult construction conditions such as bridges over waterways, viaducts over the railway line, or when the construction period is very limited. "Unfortunately, less attention is paid to the fact that precast solutions can help significantly reduce obstacles in the traffic.”